A few months ago, the awesome and amazing musician/performer/poet Amanda Palmer (formerly of the Dresden Dolls, now performing solo with a new band The Grand Theft Orchestra) reached out to me to create some art for her upcoming book and tour. Her plan was to get a bunch of artists to create visual interpretations of her new songs and herself. The results were going to be compiled in a book that would be coming out around the same time as her new album. In addition to this, she was going to do a set of acoustic performances/gallery shows where the art would be exhibited. Being a fan of such artistic collaborations and AFP, I jumped to the task! As a result, two pieces were created – one based on the song (more on that in the future post) and one depicting Amanda: 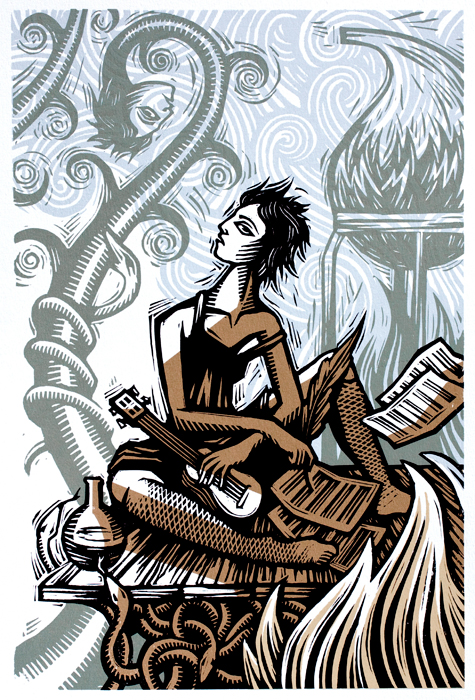 So as far as the process goes… Bellow are some images of Amanda that provide just a tiny glimpse into her personality. Her live shows are incredibly theatrical and electrifying, going way beyond being defined by any one genre. The lyrics are smart, sharp, funny and poignant.

Bellow is the initial sketch that I have actually done a year ago while working on some t-shirt designs for Amanda. Since that time, I’ve gotten to know and understand her art and music a little better. While coming up with ideas, some old medieval alchemy images started to come to mind (like the one on the right). The final result turned out to be a hybrid of those two approaches.

The initial image was a linoleum cut (on the left), actual print (on the right). 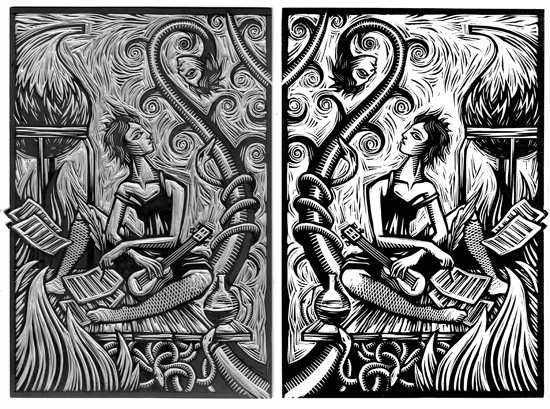 After scanning the print into Photoshop, I’ve started to think of how this could appear in color. I broke the image down to three colors and also added a background layer of the smoke in the background. Bellow are the four files I’ve used to create the screens from, initially deciding that one is going to be black, the other brown, next one dark green and the last one light blue. Some of those would overlap when printed.

And here’s how it all started to come together when the screens were all done and the printing process had begun.

As always, the plan was to crank this out in one night. As it happens, it took two whole nights just to get all the inks mixed and figured out. Of course there were little surprises along the way. This time after spending a few hours coming up with a perfect color combination I had to throw the inks out and start from scratch, simply because those particular inks would not cooperate with the paper. 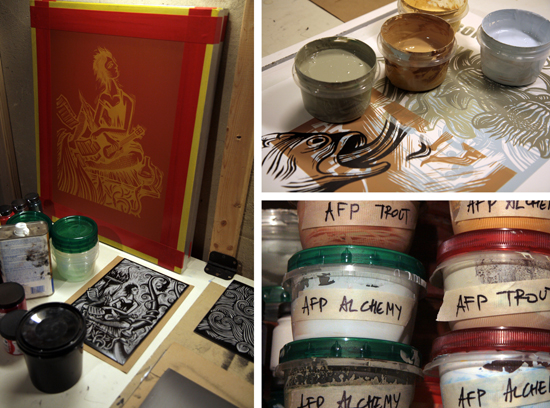 Working my way from background to foreground, light to dark. The final pass was the black layer.

And here are a few detail shots. 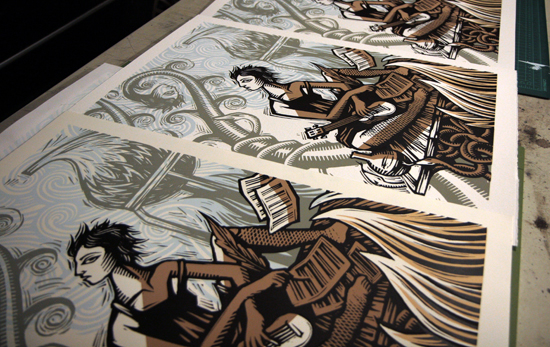 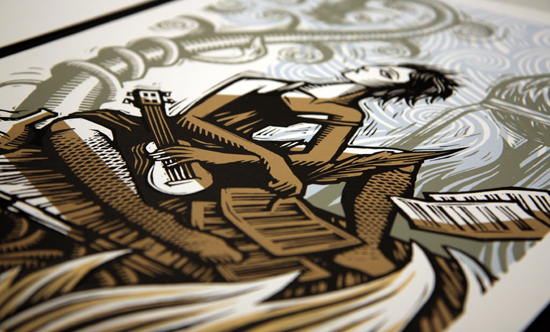 This is the print alongside the one I’ve made for one of the songs. 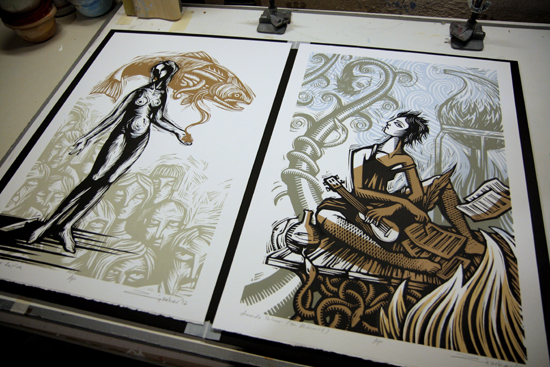 Since sending those out to Amanda’s headquarters they have traveled to London, Berlin, Paris, San Francisco, Los Angeles and Boston. They are also now available at Etsy for sale. Bellow is a picture of Amanda in front of them at one of the gallery show events (I believe that one is from London). More on those events, shows, the book those will appear in and the art talk that Amanda and I did in San Francisco a bit later.

In the summer of 2011 I have met Mihail Pogarsky, a man who is hugely involved in the Russian Artist Book art scene. He organizes annual Artist Book Fairs in Moscow, publishes a magazine on the subject, initiates a variety of international book projects and creates beautiful books himself. Over coffee we’ve discussed many aspects of what we do and what’s happening in the book art world in Russia and USA. Several months later I have received an email from him asking me if I would be interested in participating in a project that he is curating entitled Music of the Book. 12 artists from Russia and 12 from Germany and Austria were involved. This was designed to be a multidisciplinary project between Artist’s Book and multimedia. The books that were to be created would be part of an international traveling exhibition. Bellow is my entry.

The brief was to create a one or two spread book that will reflect visually a certain piece of music, sound, noise, etc. I initially wanted to take a piece of music for the interpretation (Gavin Bryar’s Jesus Blood Never Failed Me Yet, for an example). Then an idea came to use a sound that is not a sound at all. To visualize something that we all hear sometimes inside of us, but that can not be projected or recorded. So here are the process stages of The Sound of a Migraine:

I wanted to use the image of the rats scraping away at something. I “borrowed” the rat linocut image from a piece that I have done last year for a story by Adgar Allan Poe. The choosing of the background followed.

This was going to be a collage. I wanted to actually cut out the “pounding headache noise”.

After a while, the studio desk was filled with x-acto knives, ink, prints, chipboard and paper.

In addition to the cut-out red “sounds”, I made a rubber stamp that would be stamped in black over the final inside spread.

The cover image would serve as an introduction to what’s inside. Prints and cutouts were mounted onto a chipboard.

This book was an edition of two. Both copies were sent to Mihail in Russia. So far they have been exhibited at the Central House for the Artist in Moscow and the Tretyakov State Gallery, among other places. Germany is next,  so you might catch them floating around Europe at some point! Check out more about the concept and see other artists’ submissions here.